Still at home. Still cooking. But I'll admit I'm looking forward to eating a meal that I didn't cook myself. Having said that, this supper was a treat. I've missed going to our local Mexican restaurant. And while this dish doesn't taste at all like anything on their menu, it is delicious in it's own right. And it does have a Mexican influence. It is  more like "slightly Mexican."

At 5:30 pm, I pulled out the chicken tenders, onion, and the peppers with plans to do a quick skillet something or other. But I wasn't excited either the "something" or the "other." Then I looked at those three things on the kitchen counter. And aha! I had a lightbulb moment. I remembered this recipe from a few years back. I had some small tortillas in the freezer. There is always a can or two of Rotel on the shelf. Plus I had lettuce that needed to be used sooner rather than later. And cheese and sour cream are staples in my refrigerator. That's all I needed.

Forty-five minutes later—from staring at the chicken on the counter to sitting down to eat—supper was on the table. Pay attention...thirty of my 45 minutes was letting the chicken cook in the oven. It's a mostly hands off recipe. 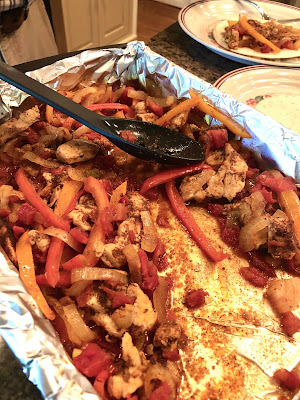 In a small bowl (I used a custard cup) combine the oil, chili powder, cumin, garlic powder, oregano and salt. Drizzle the spice mixture over the chicken and stir to coat. Add the undrained tomatoes, peppers and onions to the dish. Stir to combine.

Bake, uncovered, for 25-30 minutes, or until chicken is cooked through and the vegetables are tender. Stir a time or two through the cooking time.
We spooned the chicken, along with sour cream, shredded cheese and lettuce, into flour tortillas. I finally figured out that it's easier to spread the sour cream on the tortilla first, then add the rest. Roll it up and enjoy!

The next night when there was only one tortilla left, I opted to eat fajita unwrapped. Just piled the chicken/pepper mix on the plate and topped it with lettuce, cheese and sour cream and put a few big blue tortilla chips on the side. I might have liked it better this way.

~~~~~~~~~
Notice that I used italics for the word "stir" every times it appears in the recipe. I used the italics because I forgot to stir it at all. Until I took it out of the oven. Why is my brain in slow gear??? Thankfully it was still good. I like a recipe that is difficult to mess up!