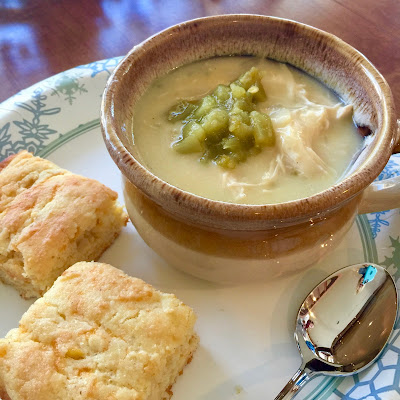 I hadn't planned to write another blog post this week. But it was 20 degrees here this morning. Which was warmer than yesterday. It's been crazy cold here for days now. So you might need another soup recipe. I made this for lunch on Tuesday, the day the last family loaded the car and headed home.

It's quick to make. It's tasty. Our doesn't-eat-red-meat daughter could have a bowl of this. And because Little Sister said she didn't want soup, I could save a little cooked chicken to make a sandwich for her. One recipe that worked for all of us.

I don't use condensed canned soups much anymore, but figuring out a work-around for the soup would have taken more thinking that I could manage as we rounded up toys, washed the last load of laundry, hunted for caps and gloves, and gave a million hugs—because "we won't see you tomorrow." It was those convenient canned soups that made this so easy. I did choose the Healthy Request version of these soups that are lower in sodium.

Unlike all the white chicken chilis I've eaten that are broth based, this one is thick and creamy. There's a block of cheese in there! It's a stick-to-the-ribs kind of soup, perfect for these frigid days. And the "chili" flavor comes only from the green chilies, so it's not overly spicy. And I still didn't add as much chilies as the recipe calls for. So son-in -law piled the extras on top of his soup. That made a much better photo! And for him, a better bowl of soup. 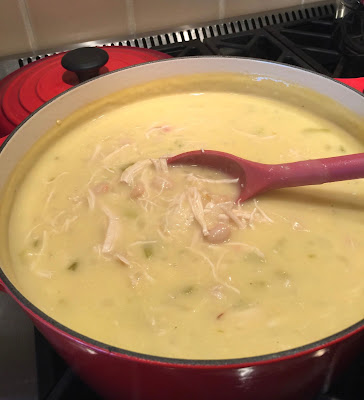 I'm giving you the recipe just as it was given to me, and then I'll tell you what small adjustments I made. It's the kind of recipe that you can tinker around with to make it work with what you like or what you have on hand. (For the record, the first time I had this soup was when my friend Susie brought it here when I had pneumonia several years ago. I'll always think of this as a comfort meal.)

In a separate large pot, saute onion and minced garlic in olive oil. To this pot, add the shredded chicken, and all remaining ingredients.

Stir everything together and add in chicken broth until you reach the right thickness. Simmer to let flavors mix.

My store only had boneless, skinless breasts the day I shopped. So I cooked those in water with some seasoned salt and shredded as per the recipe. Then I added a 32-oz box and a 14-oz can of low-sodium chicken broth instead of the broth from the cooked chicken. That was probably even easier.

I ate leftover soup yesterday and think it might have been better than the first time. I also put a couple of quarts in the freezer for later. Fingers crossed that it thaws well. I cannot imagine why it wouldn't.

I was lucky enough to have Corny Cornbread left from our peas and collards meal the night before. It's also an easy recipe if you need to make some on soup making day. It's perfect with this soup.

Stay warm, folks! There are still cold days ahead.

Email ThisBlogThis!Share to TwitterShare to FacebookShare to Pinterest
Labels: soup