Five inches of rain in three days. That was our weekend. That's an incredible amount of water. This morning when the sun finally came out, we got to see some of the results of all this water. 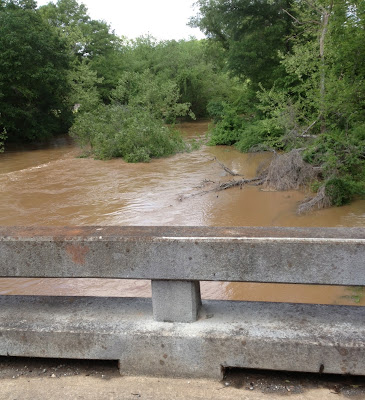 It has been quite a while since we've seen the river this high. The river banks are down there somewhere. Way down there. Under all that water. 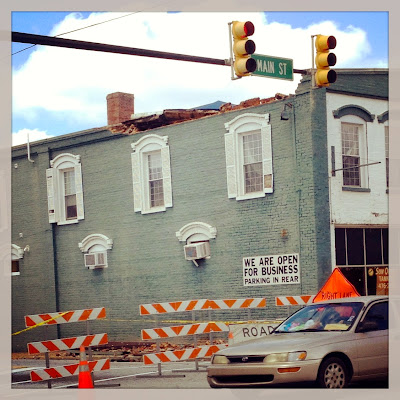 And there was some real damage in town. The weight of the water cause the roof of this building on Main St. to cave in. The "We Are Open" sign survived, but they won't be open for a long time.

But today the sun was out and things had a chance to dry out a bit. Before more rain arrives tomorrow. Like everyone else, we tried to get some things done outside during this break in the weather. Daddy-O managed to get a lot done—considering he was working with only one hand. Bless him. 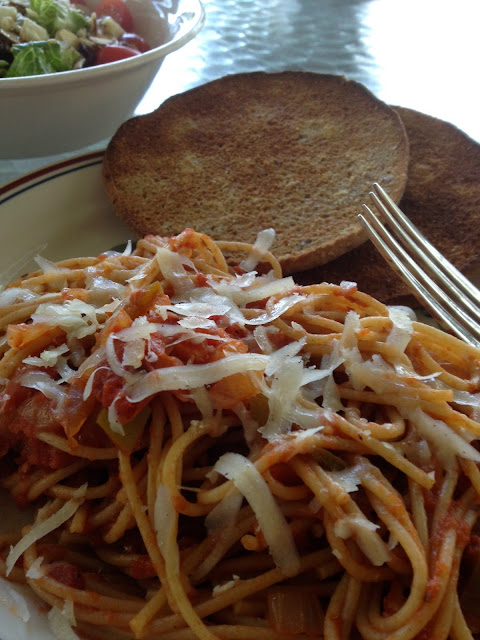 When I came in tonight, my first thought for supper was spaghetti. But I didn't have any spaghetti sauce in the freezer, or even a jar of marinara sauce on hand. Frankly, I didn't have much of anything that I was looking for. But there is always something you can make. This was my "no recipe" supper. Here's what I did:

Put the pot of water for the pasta on to boil first. That takes longer than anything else. While the water heats, chop 1/2 of a large onion. Then heat 1 tablespoon olive oil in a large skillet. When hot, add the chopped onion, 1/2 cup of chopped green pepper from the freezer, and 1 heaping teaspoon minced garlic from a jar. Saute that until the onion is translucent. Stir in a 14.5-oz. can of fire roasted crushed tomatoes and 1 teaspoon Italian seasoning. Cover and let simmer until the spaghetti is cooked.

While the water was still heating, I quickly made two simple salads. By now the water was boiling. I used 1/3 of a box of whole wheat thin spaghetti (4 oz.) I broke the uncooked spaghetti in half before adding it to the boiling water. Then I made garlic toast while the spaghetti was cooking.

When the spaghetti was done, I drained it and stirred the spaghetti into the tomato sauce in the skillet. (Add a little of the cooking water to the sauce should it be too thick.) I topped it with a little shaved parmesan.  Serves 2-3

Daddy-O declared this, "Good—really good!" He said that and it didn't have any meat in it! I think it was the fire roasted crushed tomatoes that made this work. The consistency of the tomato sauce was thick and rich. It was one of those "the whole is greater than the sum of its parts" meals. Nothing I used was very special, but the end result was so good. Not sure that I'll want that jar of marinara next time. This was better.