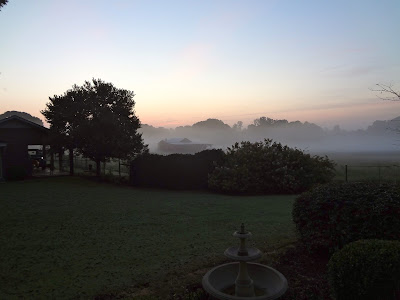 My days start early. But I could have still used a few more hours this week. 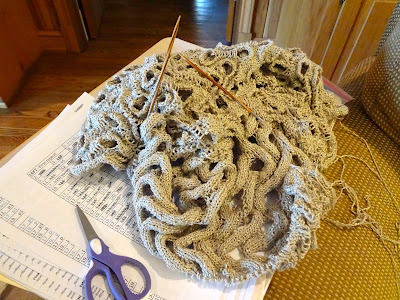 At the end of September last year, I attended Rewind Retreat at the lake with a group of knitters, where we started this shawl project. Well, the 2013 retreat is just a few weeks away and I'm still knitting on that same shawl! There were months off while I had pneumonia and bronchitis. There were weeks off while I knitted other things. There were days off when I baby sat. And some of the time I just ignored it.

But I am determined to wear the finished shawl to the retreat. I don't care if it's 90 degrees that weekend. This pile of a million stitches will be a shawl by then. I hope. No, it WILL be a shawl. Must think positive! So this week, while I've cooked (but nothing memorable), the focus has been on the knitting. Just stay with the program and get it done. 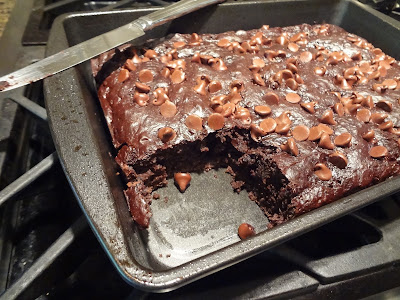 I did take a few minutes this afternoon to try a new cake recipe. Something for Daddy-O to enjoy during tomorrow's football game. I didn't want it to take long, so "dump cake" sounded easy enough.

I don't use a lot of cake mix. It's not that hard to make one from scratch. But this afternoon, I was in a hurry. I had one box of cake mix and one box of pudding mix in the pantry. Both chocolate. That decided it. This was the recipe to try.

It's the kind of recipe that my daughter (Mommy) doesn't like because it doesn't say how long to cook the pudding or how thick it should be. I figured if they didn't say, it probably didn't matter so much. I cooked it until it was thicker than just milk but still not nearly as thick as cooked pudding. When I stirred in the cake mix, it looked gloppy and spongy. Strange way to make a cake but I just kept going.

Daddy-O came in from the hay field just a few minutes after it came out of the oven. He asked if I was taking it somewhere and was delighted when he found out it was just for us. He cut a piece right then and asked, "Is this some kind of fancy brownie?" It's not as dense as a brownie, but it IS nice and fudgy—really, really good with a scoop of ice cream on the side! 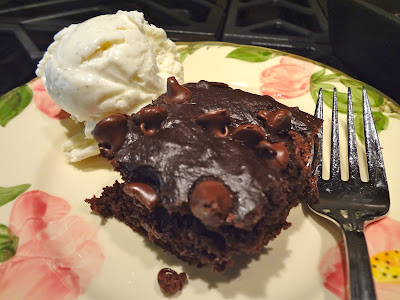 Preheat oven to 350 degrees. Lightly grease a 9x13-inch baking pan.
Combine chocolate pudding and milk in a saucepan and cook over medium heat until thick, stirring frequently.
Remove pan from heat and stir in dry cake mix. Blend well and pour into greased pan. Sprinkle chocolate chips evenly over batter.
Bake for 35 to 40 minutes, or until done. (Test with a toothpick.) 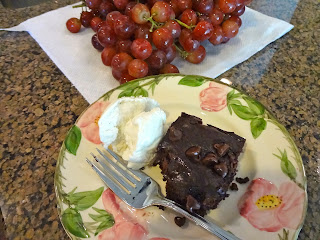 I know. I know. I should have had the grapes.