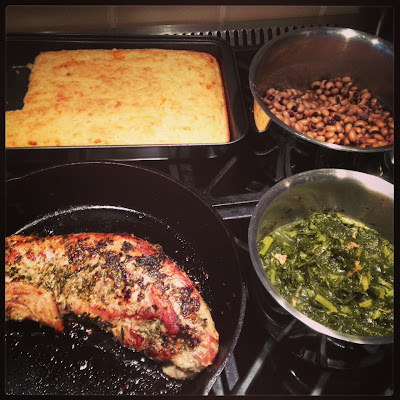 If you live in the South, chances are you had this same meal today. Nothing says "Happy New Year!" like the traditional dinner you eat to insure your wealth for the coming year—peas (for coins) and collards (for folding money) along with pork and cornbread. At least that's what my mother always said. We were afraid not to eat it (I didn't like collards back then) for fear of being broke. I would hold my breath and swallow a couple of bites of collards and figure I didn't have to eat any more for a whole year. I still would not skip this meal on New Year's Day for anything. Tradition dies hard.

Baby Sister is still here with us. She ate her share of peas and more than her share of cornbread. She swallowed one small bite of collards. So I guess her piggy bank will be full in 2013.

Since it is raining today we didn't make the Bourbon Marinated Pork Tenderloin on the grill like we often do. Might also have something to do with the fact that I forgot to mix up the marinade in time. So I poked around on the internet and found a new recipe. Completely different flavor from our standard but very, very good. It's nice to have a quicker, easier recipe.

Heat oven to 400 degrees. Heat a large, heavy oven-proof skillet (I used a cast iron pan) over medium-high heat. Add 1 tablespoon olive oil. Add pork. Brown on each side, about 4 minutes per side.

The recipe that I started with used all fresh herbs--1 tablespoon each of rosemary and sage and 1 teaspoon of thyme. I only had rosemary still growing in the garden, so I used a mix of fresh and dried. If you need to switch one for the other, the rule of thumb is 1 tablespoon fresh=1 teaspoon dried.
Posted by Mimi at 2:53 PM

Email ThisBlogThis!Share to TwitterShare to FacebookShare to Pinterest
Labels: pork